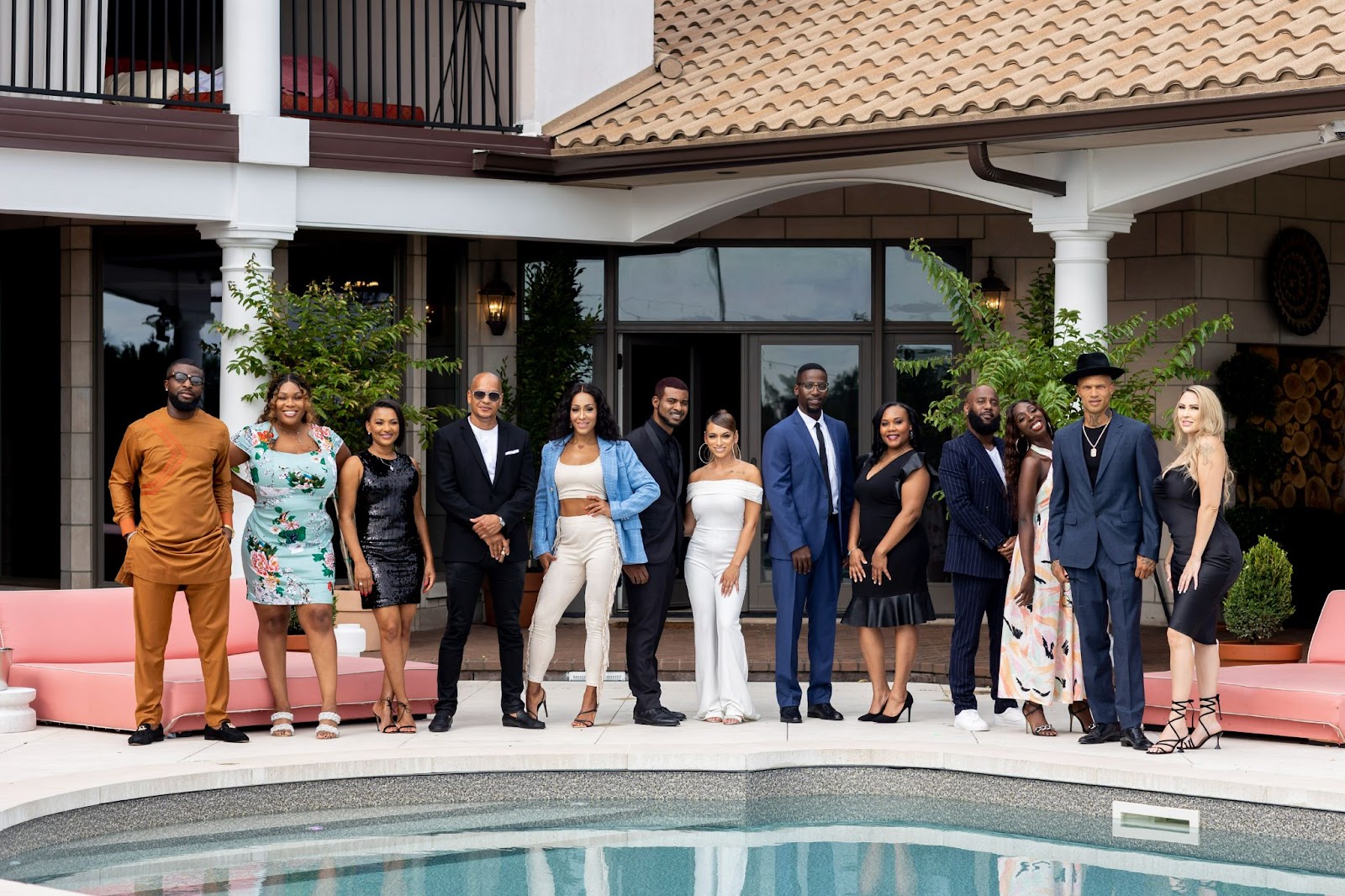 Couples looking for their new true love in “After Happily Ever After” include:
Tara Wallace is an etiquette coach, actor, and current host of, Soul Food with
Tara Wallace. Tara initially came into the public eye when she started dating
Peter; their relationship lasted for 13 years.
GRAMMY® Award nominated rapper Peter Gunz is best known as part of the
hip-hop duo ‘Lord Tariq and Peter Gunz.’ Peter will admit he is more often
associated with his love triangle featured on Love & Hip Hop: New York, with
Tara and Amina Buddafly.
Amina Buddafly is an R&B singersongwriter who rose to fame as a former member
of the girl group Black Buddafly. She and Peter were married for five years.
Model and actor Jeremy Meeks went viral when his mugshot hit social media and landed him the title of the Hot Felon.
Melissa Meeks is a Registered Nurse who met Jeremy in 2008. They were married for nine years and have one child together.
Nicole Ward runs a successful trucking and logistics company in Atlanta, GA. She met music producer and writer, “Mike Mike” Phillips, at an industry party and the two were married for five years. “Mike Mike” is well known for multiple smash hits like “Whoot, There It Is” from the group 95 South and “Tootsee Roll” by the 69 Boyz.
Amarachi Odinma is a successful plus-size model/journalist. Ugo Maduka an established motivational speaker, author, TV actor, and fashion line owner who flew from Nigeria to America to find Amarachi after seeing her live on TV. The two were married for four years and share two children.
Pam and Troy Taylor were high school sweethearts who met through church. Troy is a nurse practitioner and Pam is a licensed pharmacy technician who is excited to start dating again. Sharing four children, Pam and Troy both reside in Covington, Georgia.
Justin Vorise and Nani Rivero met in high school and continue to successfully co-parent a son together in Southern California.
Notable “After Happily Ever After” daters include:
On each installment of the eight-episode reality series “After Happily Ever After,” Bow Wow will throw a Singles Party with a new group of potential prospects for the daters. These parties only attended by the Ex-spouses so that they can determine who might be best suited for their former partner. The Exes will invite one of the prospects to move into the house for 48 hours to date their former spouse. At the end of the two days, the dater will decide to either keep the prospect or send them back to the singles pool and take another opportunity to meet someone new. Are Exes the best equipped candidates to help these daters meet their next loves? In this environment, will old feelings resurface while watching their former partner fall in love with someone new? Will they realize their Ex is still the one? Or will they find a new love in their “After Happily Ever After”?

“After Happily Ever After” is executive produced by Julie Pizzi and Erica Ross with Bunim/Murray Productions (MTV’s The Real World and The Challenge, OWN's Family or Fiancé), and Andrea Richter serves as the series showrunner. Tiffany Lea Williams and Angela Aguilera serve as executive producers for BET.
For more information, visit the series show page on BET.com. Follow @BET across social media platforms and join in the conversation using the hashtag #AHEAonBET.

About BET
BET, a unit of Paramount (NASDAQ: PARAA; PARA; PARAP), is the nation's leading provider of quality entertainment, music, news, and public affairs television programming for the African American audience. The primary BET channel is in 125 million households and can be seen in the United States, Canada, the Caribbean, the United Kingdom, sub-Saharan Africa, and France. BET is the dominant African-American consumer brand with a diverse group of business extensions including BET+, the preeminent streaming service for the Black audience; BET.com, a leading Internet destination for Black entertainment, music, culture, and news; BET HER, a 24-hour entertainment network targeting the African American Woman; BET Music Networks - BET Jams, BET Soul and BET Gospel; BET Home Entertainment; BET Live, a growing BET festival business; BET Mobile, which provides ringtones, games and video content for wireless devices; and BET International, which operates BET around the globe.

About Bunim/Murray Productions
Bunim/Murray Productions (BMP), a division of Banijay Americas, is the leading producer of innovative entertainment content. The Emmy Award-winning company is widely credited with creating the reality television genre with its hit series The Real World on MTV, the first reality game show, Road Rules (MTV), in 1995; the first reality sitcom, The Simple Life (E!), in 2003; and the first reality soap opera, Starting Over, in 2003. BMP’s current programming includes Emmy-nominated Lizzo’s Watch Out For The Big Grrrls (Amazon), The Challenge (MTV), The Challenge USA (CBS), The Challenge All Stars (Paramount+), Born This Way (A&E), Kim Kardashian West: The Justice Project (Oxygen), Ball in the Family (Facebook Watch), Miz and Mrs. (USA Network), Don’t Forget The Lyrics (FOX), Family or Fiancé (OWN) and Total Bellas (E!). BMP, through BMP Films, has also produced Transhood (HBO) They Call Us Monsters (PBS), Valentine Road (HBO), Pedro (MTV), and the Emmy Award-winning Autism: The Musical, and Autism: The Sequel (HBO). Based in Glendale, CA, the company was founded in 1987 by Jonathan Murray and the late Mary-Ellis Bunim, who were inducted into the Television Academy’s Hall of Fame in 2012. The company joined Banijay Group in 2010.